In the lead up to this Valentine’s Day, it seems like everyone is determined to kill any semblance of romance in the air.  The Tinder Swindler, a documentary about a con man who used the dating app Tinder to defraud multiple women, is one of the most popular shows on Netflix right now.  (I highly recommend it).  Valentine’s Day flower prices are at an all-time high.  And the FTC issued its latest report on romance scams last week, disclosing that consumer losses to romance scammers have gone up 80 percent since 2020, reaching a record high of $547 million in 2021. (Please take a look at previous posts from my colleagues on similar FTC and BBB reports here, here, and here).

When the call went out to my advertising colleagues to report on this latest legal news, I jumped at the chance – still reeling, as I was, from the aftermath of The Tinder Swindler (spoiler alert: this guy is still out there, just living his life!).  Also, let’s be honest, nobody else in my advertising group has personally navigated (or admitted to navigating) the treacherous waters of dating apps like I have, so who better to report on these disturbing trends than me.

Luckily, my dating app adventures can best be described as a mixture of fun, awkward, and cringeworthy – but they ultimately led me to marital bliss (#blessed).  Even more thankfully, our relationship was not formed under the guise of a criminal enterprise, but instead was built on the type of innocent white lies everyone has in their dating app profiles (Him: his height; Me: despite a profile pic at Dodgers Stadium, in my LA Dodgers gear, I have zero interest in the Dodgers - or baseball for that matter.  I mean, you can’t help where your most flattering picture is taken, right?  Although I’m sure many would say the implied claim was blatant false advertising:)).

The FTC’s recently issued report reminds consumers to be vigilant of romance scammers, who tend to follow a predictable pattern of using pictures stolen from the internet to build a false persona – and ultimately asking for money from the unwitting consumer for various reasons.   While many people reported these scams originating on dating sites or apps, social media was also another frequent place of initial contact between scammers and their victims, with scammers sending private messages on the social platforms.  The FTC also reported a new trend of romance scams in 2021 involved scammers luring consumers into phony cryptocurrency investment schemes – with reported losses in cryptocurrency totaling $139 million in 2021, more than for any other payment amount. Despite the increase in cryptocurrency being used for such scams, most consumers report sending money to scammers via old-fashioned gift cards.

The FTC provides the following tips for consumers to spot scammers when looking for love online, and encourages individuals to report suspicious profiles or messages to the dating app or social media platform, and to report such activity to the FTC at ReportFraud.ftc.gov:

Of course, dating platforms should also be doing their part to provide a safe environment in which individuals can find love – or let them abandon their search without a hassle.  This seems like a good opportunity to remind our readers that dating sites have gotten in trouble in the past for failing to comply with state auto-renew laws, requiring that they clearly and conspicuously disclose to consumers the fact that their contracts with the site would automatically renew, the amount of ongoing payments, or how to cancel those contracts. My colleague wrote about eHarmony’s 2018 settlement with the Napa County District Attorney here, in which the dating site was forced to revise its disclosures to consumers and make payments of $1 million in restitution to its customers and $1.2 million in civil penalties.

After that sobering news, I’d encourage you all to follow my lead this Valentine’s Day to avoid any risk of a romance scam.  I’ll be happily watching J.Lo’s newest rom com, Marry Me, at home with my friends because true love really “don’t cost a thing.” 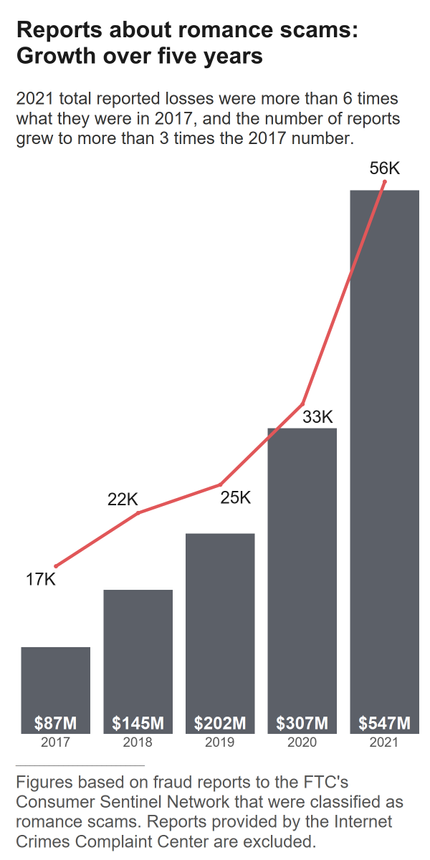