According to the White House, Bedoya's research and advocacy focuses on the idea that "privacy is for everyone."  The White House explained that, "His exposés on the harms of face recognition technology have helped usher the passage of face recognition restrictions across the country, led the National Institute of Standards & Technology to conduct the first comprehensive bias audit of face recognition algorithms, and paved the way for a federal law requiring bias testing in airport face recognition systems, section 1919 of the FAA Reauthorization Act of 2018. He also co-led a coalition that successfully pressed an Internet giant to drop ads for online payday loans, which were often served in response to searches like 'I need money to pay rent' or 'I need money for groceries.'"

Bedoya is being nominated to take the place of Commissioner Rohit Chopra, who the President has nominated to be the Director of the Consumer Financial Protection Bureau.

In a statement, FTC Chair Lina M. Khan said, "Congratulations to Alvaro Bedoya on his nomination. Alvaro’s expertise on surveillance and data security and his longstanding commitment to public service would be enormously valuable to the Commission as we work to meet this moment of tremendous need and opportunity."

On Twitter, Bedoya said that, "It is the honor of my life to be nominated to serve on the FTC.  When my family landed at JFK in 1987 with 4 suitcases and a grad student stipend, this was not what we expected." 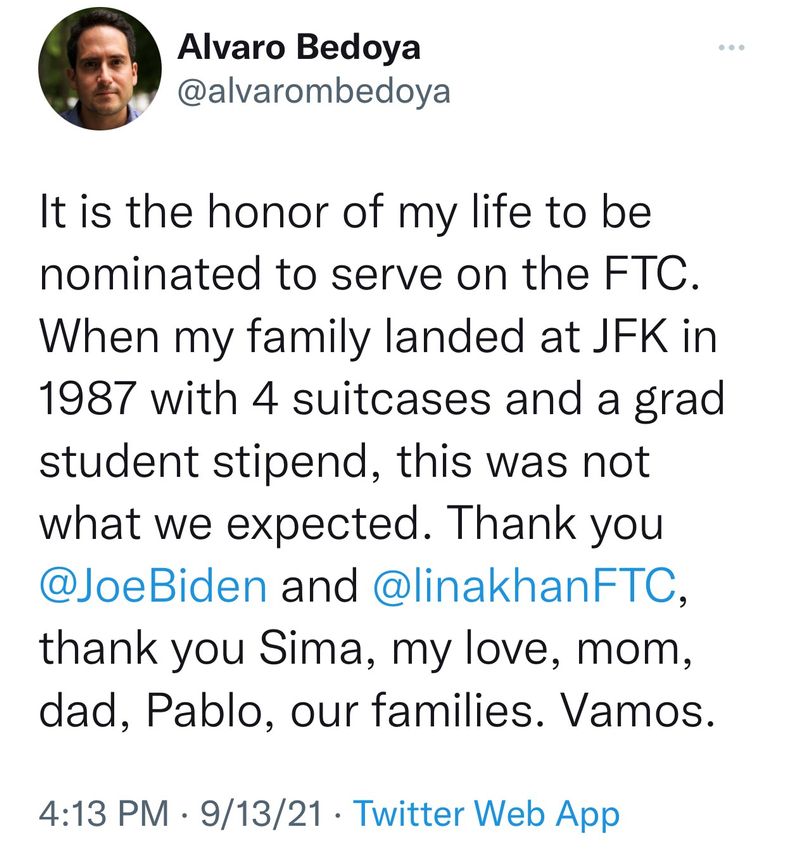