In online advertising, it’s commonplace for businesses to purchase competitor trademarks as search engine keywords to get in front of potential customers.  But when does leveraging a competitor’s online brand presence cross the line from healthy competition into trademark infringement?

The Fifth Circuit recently addressed this question in a trademark infringement action brought by prominent Texas personal injury lawyer Jim Adler—a.k.a. “The Texas Hammer” or “El Martillo Tejano.”  Adler is a well-known personal injury lawyer specializing in auto accidents who has been practicing in Texas for over fifty years. He is famous for his explosive, over-the-top ads (many of which I can recite from memory, thanks to my Fort Worth, Texas upbringing), which prominently feature Adler as an aggressive, no-nonsense lawyer riled up and ready to bust down the courthouse doors to win the case.

As part of his marketing efforts, Adler purchases Google keywords using Adler trademarks as search terms—including JIM ADLER, THE HAMMER, THE TEXAS HAMMER, and EL MARTILLO TEJANO.  For example, when a consumer performs a Google search using one of Adler’s marks as a search term, Adler's ads appear alongside the results produced by the search engine's algorithm. 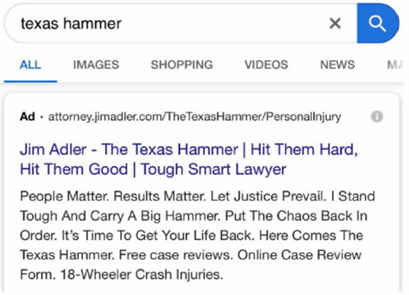 Adler alleged that AILC purchases Adler’s keywords as part of a bait-and-switch scheme.  Namely, when a consumer searching for Adler on a mobile phone clicks on an AILC “click-to-call” ad, it causes the user's phone to call AILC rather than visit AILC’s website, whereupon an AILC representative answers the phone using a generic greeting (e.g., “did you have an accident?” or “tell me about your accident”) without immediately disclosing that that AILC is not affiliated with Adler.  Adler thus alleged that AILC’s purchase of Adler’s marks as Google keywords deceptively induces prospective clients searching for Adler into mistakenly contacting and engaging AILC instead.

AILC moved to dismiss Adler’s complaint, arguing that the mere purchase of a Adler’s trademark as keywords is not trademark infringement, and that its generic click-to-call ads and phone greetings similarly did not create a likelihood of confusion because they do not directly incorporate Adler’s trademarks and instead use generic terms associated with personal injury lawyers.  The district court agreed, dismissing Adler’s complaint on the basis that AILC does not use Adler’s marks in its ads, and because “dismissal of trademark infringement claims is appropriate when they are based on the use of generic terms.”

But El Martillo Tejano doesn’t go down so easy. Last month, Adler’s complaint was reinstated. Specifically, the Fifth Circuit rejected the district court’s reasoning on appeal, finding that Adler “made specific factual allegations describing how the use of the Adler marks as keyword terms — combined with generic, unlabeled advertisements and misleading call-center practices — caused initial interest confusion” sufficient to state a claim under the Lanham Act.

The Fifth Circuit’s decision to revive Adler’s trademark infringement claims turned on its analysis of initial interest confusion in the context of search engine advertising.  Initial interest confusion is confusion that “creates initial consumer interest, even though no actual sale is finally completed as a result of the confusion.”  Analogizing to the Ninth Circuit’s understanding of trademarks in meta tags, the Fifth Circuit held that “the critical issue is whether there is consumer confusion. Distraction is insufficient.”  In other words, the use of a trademark in the context of internet searches or search-engine advertising must cause a consumer to mistakenly believe that the ad shown belongs to or is affiliated with the trademark holder—even if the consumer eventually realizes it is not—in order to constitute a Lanham Act violation.  Conversely, if a consumer is merely distracted by the ad, but is unlikely to mistake it as being affiliated with the trademark holder, then no infringement occurs.

The Adler decision provides useful guidance for businesses seeking to use internet keywords to intercept consumers searching for competitors’ products and services—without running afoul of the Lanham Act.  While the purchase of a competitor's trademarks as keywords is, without more, unlikely to be considered trademark infringement, a business can reduce the risk that it will be accused of infringement by ensuring that the source of the ad shown is clearly indicated and does not suggest, either by misstatement or omission, that it is affiliated with the trademark holder. 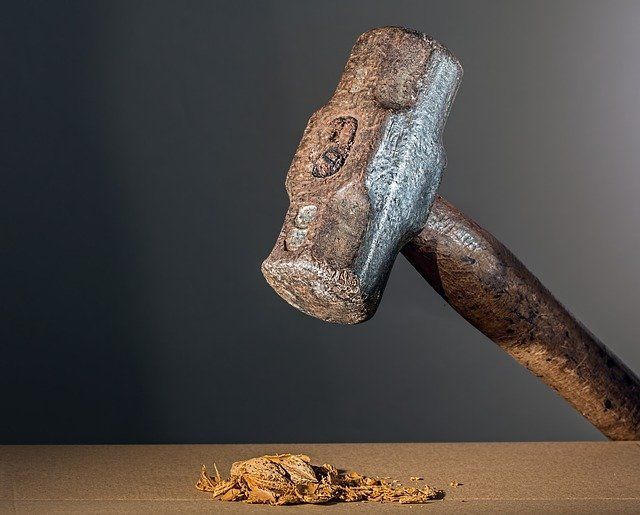