Bud Light has entered the chat.

Anheuser-Busch’s popular brand of light beer, Bud Light, announced its own video game console named the “BL6”, which is part coozie, part projector, and part console. While the demand for the newest generation of consoles (Sony’s PlayStation5 and Microsoft’s Xbox Series X) continues unabated, gamers looking to get the BL6 won’t have much luck. Only one exists.

The BL6 touts six built-in games, two controllers, two built in coozies to keep beers cold, and a built in projector to play wherever you can carry it. More impressive than the product’s features, the BL6 is being auctioned for over $8,000 and creating quite the buzz.

This isn’t the first time food and beverage brands have tried to get in with the gaming community. When Sony revealed the PS5 design earlier this year, KFC posted a video for its "KFConsole" a day later. The bucket-shaped console, which purportedly includes a chamber for warming chicken, is yet to be confirmed. It may simply be a publicity stunt for KFC Gaming (the brand’s gaming division), but the multiple social posts about the console certainly have people wondering. After all, KFC released a Colonel Sanders dating simulator game last year.

Also last year, Miller Lite created 200 beer cans that function as video game controllers. The "Cantroller" was offered as a prize for E3 attendees who virtually defeated a celebrity in a gaming event to promote the launch of Miller Lite’s Twitch channel.

As the gaming industry continues to grow, it’s no surprise that it has caught the attention of advertisers. In addition to video ads in mobile games for extra lives, or in-game product placement, advertisers have sponsored influencer livestreams and e-sports competitions. In-game advertising historically has been met with skepticism and criticized as distracting. However, novel and well-executed campaigns have had better reception from the gaming audience. The BL6 is one indicator of where advertising and gaming may be headed, and for a charitable cause to boot. According to the auction site, Bud Light will match the proceeds from the BL6 bidding, which will benefit The National Restaurant Association Educational Foundation. 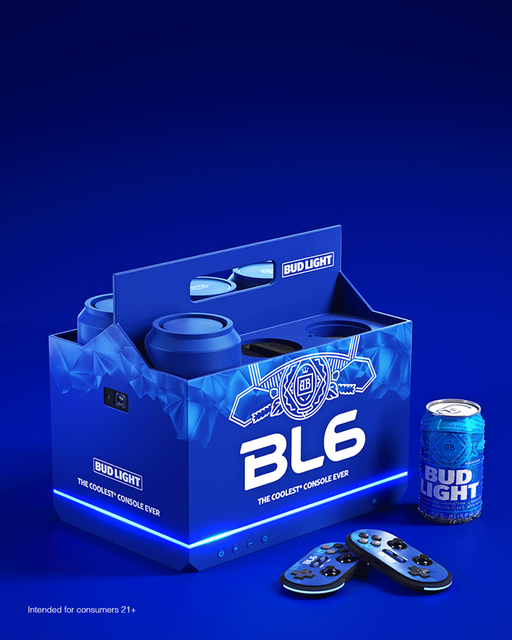 Developer Issues DMCA Takedown Notice to Remove Its Own Game from Steam, Claiming the Publisher Pirated the Game
Frances Jensen