WARNING:  A certain five-letter word that rhymes with the word "snitch" - one that many (my mother included) consider to be a four-letter word - appears precisely four times in this post. Gird yourself.

Standing on its own, a great line. But when expressed by Lizzo in bold, articulated beats, it is sublime. It is no surprise that the song "Truth Hurts" - from which the lyric comes - was nominated for three (and won one) Grammy and remained at #1 on Billboard’s Hot 100 list for six weeks. The hook is so good that it spawned allegations of copyright infringement and a federal lawsuit.

The story begins in April, 2017, when Lizzo began a collaboration with Justin Raisen, Jeremiah Raisen, and Yves Rothman (the "Counterclaimants") to write and record a demo, which eventually was called "Healthy." The second verse of "Healthy" includes these lines:

I just did a DNA test turns out I’m a hundred percent that bitch.
Even when I’m holistic,
Gotta keep it realistic.
I could be, guest-listed,
But I’d rather be home, get rest, not twisted.

According to the Counterclaimants, Jesse St. John Geller (“St. John”) - another collaborator on "Healthy" who is not a party to the lawsuit but who ultimately was credited as a co-author of "Truth Hurts" (more on that below) - shared with the group an internet meme that read, "I did a DNA test and found out I’m 100% that bitch." The Counterclaimants allege that Jeremiah insisted that the line be used in the song. In a Tweet, Lizzo provides a slightly different version of how the line ended up in "Healthy": 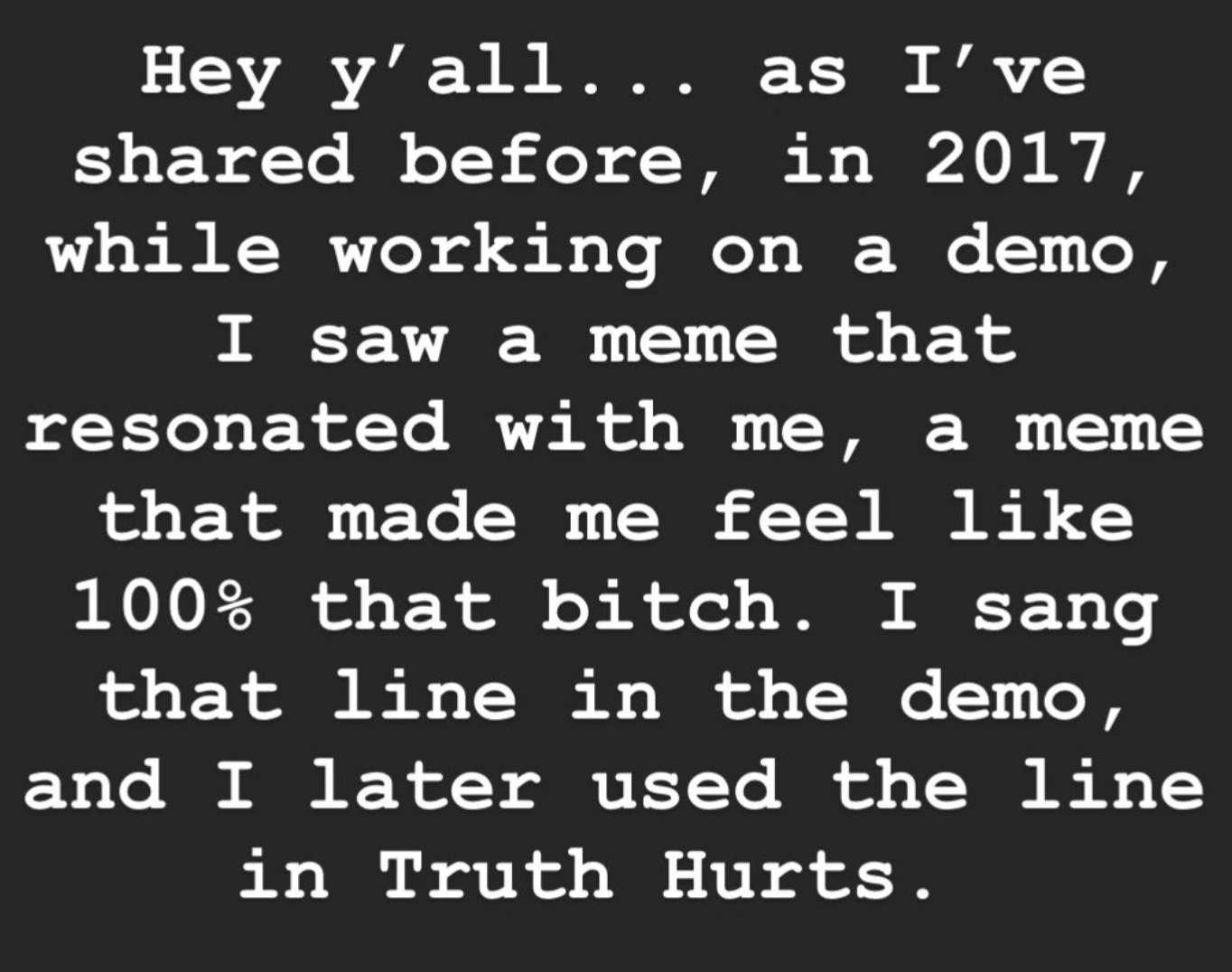 Everyone now appears to agree that the line originated in this Tweet from Mina Lioness:

Ultimately, Lizzo didn't release "Healthy." Instead, she went on to co-write, produce and release "Truth Hurts." When the Counterclaimants did not receive writing or producing credits on the song, they reached out to Lizzo's team to address the issue. When that didn't work, the Raisen brothers registered themselves as co-writers of "Truth Hurts" with ASCAP, and Justin Raisen published posts on Instagram claiming that he and his brother were entitled to partial credit on Lizzo's mega hit.

Lizzo was not pleased. She responded in three ways.

First, she publicly denied that the brothers were entitled to writing credit on "Truth Hurts." This from a Tweet Lizzo posted: 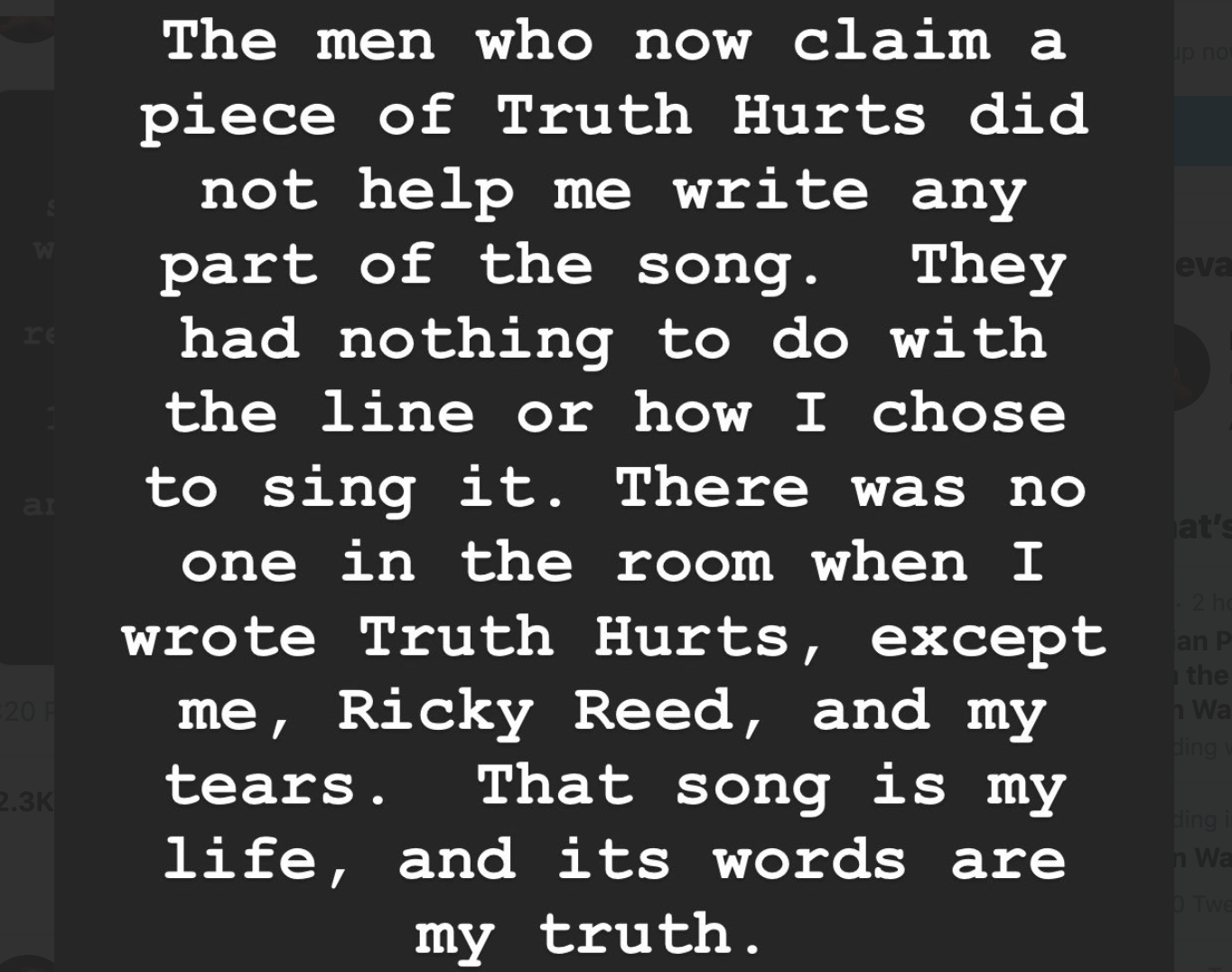 Second, she gave Mina Lioness credit as a co-author on "Truth Hurts." Here, again, is Lizzo in her own words: 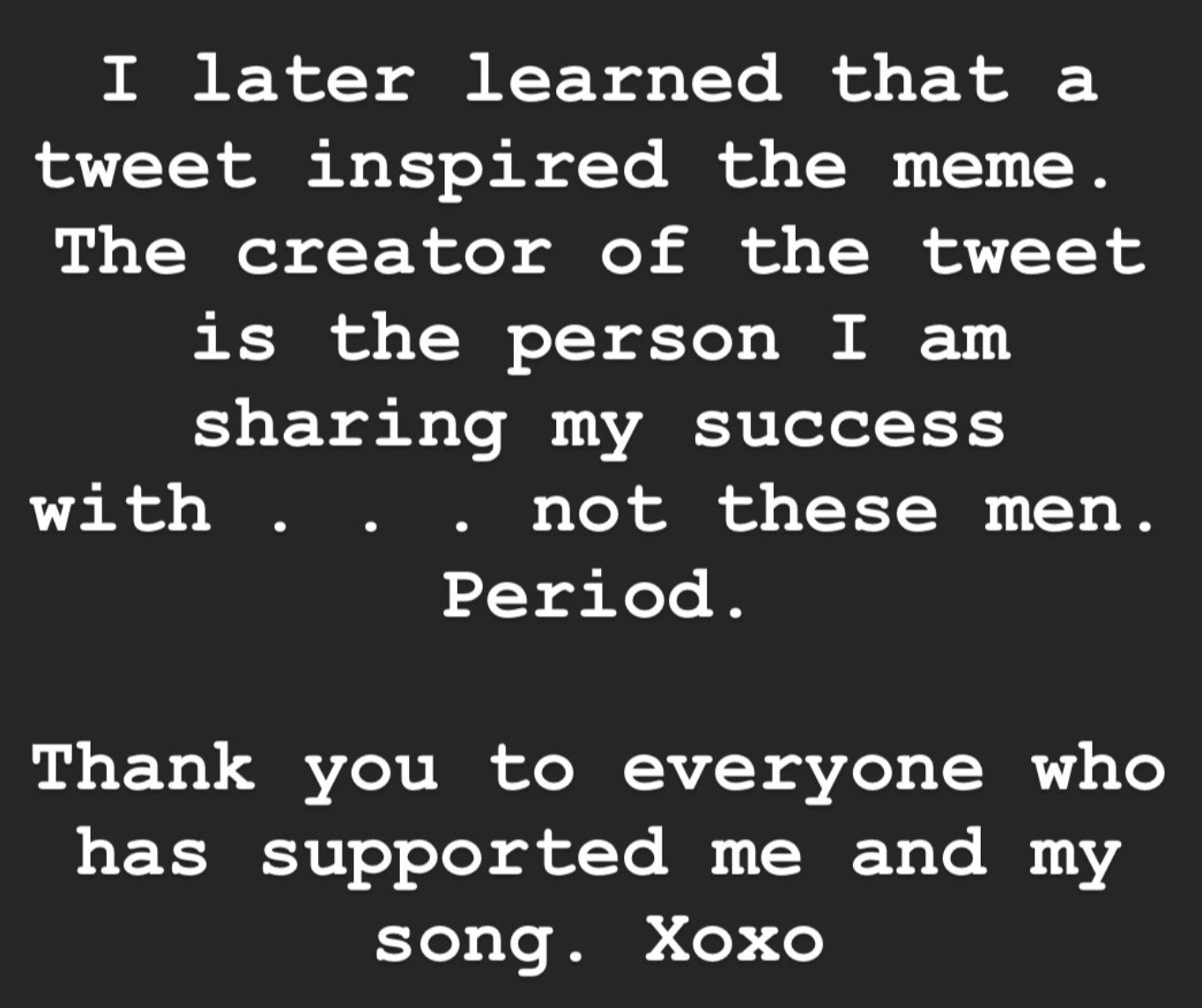 Finally, Lizzo sued her one-time collaborators in the Central District of California, seeking a declaration that they have no ownership rights in “Truth Hurts.” The trio counterclaimed, seeking their own declaration that "Truth Hurts" was either copied from, or derivative of, "Healthy."

Lizzo moved to dismiss the the counterclaims, and Judge Dolly M. Gee granted the motion. Citing Ashton-Tate Corp. v. Ross, 916 F.2d 516 (9th Cir. 1990), and Weissmann v. Freeman, 868 F.2d 1313 (2d Cir. 1989), Judge Gee held that co-authors of a preexisting work (here, "Healthy") do not automatically acquire an authorship interest in a derivative (here, allegedly, "Truth Hurts") that is based on that work where the co-authors had no involvement in creating the derivative. To hold otherwise would "eviscerate the independent copyright protection that attaches to a derivative work that is wholly independent of the protection afforded the preexisting work" (internal quotations omitted).

Finally, the court didn't believe that it was relevant that Lizzo had decided to share writing credit on "Truth Hurts" with St. John - but not with the Counterclaimants - based on St. John’s participation in the recording session for "Healthy." Judge Gee noted that the Counterclaimants could point to no "authority standing for the proposition that a musician’s decision to credit one person as a songwriter automatically confers copyright ownership of the song on other people who were present during a songwriting session." The decision doesn't explain why St. John received credit on "Truth Hurts." However, based on this Tweet from Lizzo, it's pretty clear that Lizzo considered St. John (and not the Counterclaimants) to be the "inspiration" for the DNA test line:

Second, even if their claim for co-authorship credit of "Truth Hurts" ultimately fails, that doesn't leave the Counterclaimants without a remedy if they can prove that "Healthy" was used in "Truth Hurts." In its decision, the court did not address (because it didn't need to) whether (1) "Healthy" is, in fact, a joint work that is co-owned by Lizzo and the Counterclaimants (it's unclear to me whether Lizzo disputes this), or (2) "Truth Hurts" is a derivative work based upon "Healthy" or otherwise interpolates samples from "Healthy." Assuming that "Healthy" is a joint work, then each co-owner has an undivided interest in the work (in the absence of an agreement among the co-authors to the contrary). See 17 U.S.C. § 201(a). This would mean that Lizzo was entitled to exercise - without authorization of the Counterclaimants - any of the exclusive rights in "Healthy," including the right to create a derivative work. There is nothing that the Counterclaimants could have done to prevent this because, as the Second Circuit has noted, "an action for infringement between joint owners will not lie because an individual cannot infringe his own copyright." Weissmann , 868 F.2d at 1318. However, joint owners of a song do have a duty to account to their co-authors for profits from its use. So, if the Counterclaimants can demonstrate that "Truth Hurts" is a derivative of "Healthy," then they may get a pay day after all. As Judge Gee noted, while “an author of a joint work does not acquire an authorship interest in derivative works that utilize part of the joint work, that author may be entitled to compensation for the use of the original joint work.”

Third, it is not clear from the decision whether the Counterclaimants' claims are based entirely on the use of the DNA test line or whether they allege other musical similarities between "Healthy" and "Truth Hurts." The decision includes a passing reference to a musicology report, so I suspect that the Counterclaimants do (or will) allege additional similarities. However, if it turns out that the claims are based exclusively on the use of the DNA test line, then the Counterclaimants will have some hurdles to overcome. First, it is at least debatable whether the 12-word phrase is, by itself, subject to copyright protection. As a general matter, short phrases are not subject to protect either because they contain an insufficient amount of authorship or because the idea and the expression have merged. (Here's a game:  try to express the DNA test line in different words without sacrificing the essence of the message. Not so easy.) And, of course, even if the phrase is protectable, since it was derived from Mina Lioness' tweet, it was not original to any of the litigants.

Fourth, this case presented the Counterclaimants with a choice: either they could argue that "Healthy" was a completed work and that they were entitled to compensation for Lizzo's use of elements of "Healthy" in "Truth Hurts," or they could argue that "Truth Hurts" is, essentially, the end product of a creative process that began with "Heavy" and that they are entitled to be credited and compensated as a joint authors of "Truth Hurts." Their position in the motion to dismiss, according to the court, vacillated between the two theories. We will have to wait to see which theory they will embrace in their amended counterclaims. If their true aim is to seek credit as co-authors - and thereby to obtain not only the economic benefits of co-owning the song, but also the professional benefits (and bragging rights) that flow from having co-written a big hit - then they would stand a better chance if they follow the second path. And that path, at least so far, has received a cool reception from the court.

Finally, this case demonstrates, as so many do, that authorship in the twenty-first century can be messy. A single song can be the result of the collaboration of multiple artists, during multiple recording sessions, on multiple days, sometimes over long periods. The artists are not always in the same room, at the same time, working together. So, the Counterclaimants' allegation that "Truth Hurts" represents the end product of their collaboration with Lizzo is not impossible. Time will tell whether the facts will support that allegation (if the Counterclaimants proceed on that theory). 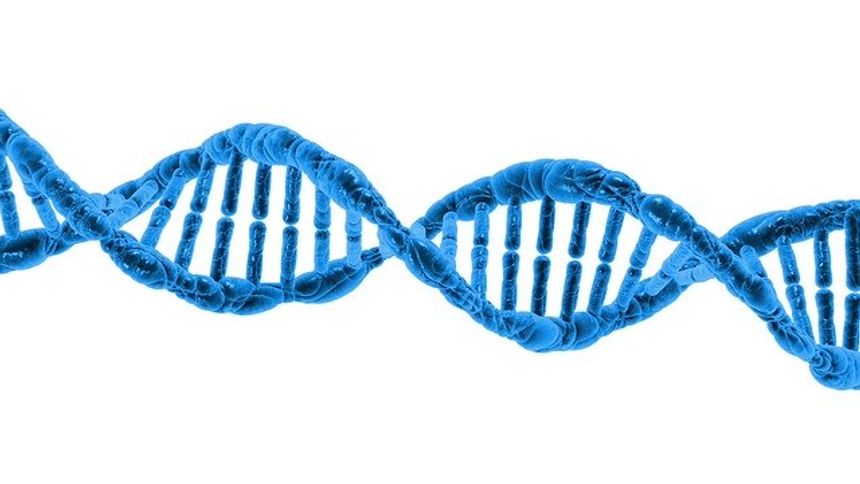