Inventure Foods sells a brand of snack chips called, "TGI Fridays Potato Skins Snacks."  According to the plaintiff's allegations in the lawsuit, while the chips were, in fact, "snacks," there were no "potato skins" to be found in them.

The plaintiff sued Inventure, Utz Quality Foods (Inventure's parent company), and TGI Friday's Inc. (which licensed to Inventure the right to use its trademark) in the United States District Court for the Southern District of New York, alleging false advertising and other claims under New York law.

While a case about potato skins probably would have always caught my eye, it has particular appeal right now, since I haven't been to a restaurant in months.  And, the TGI Fridays potato skins would taste really good right now.  The plaintiff alleged that the actual potato skins appetizer from TGI Fridays "begins with a thick slice of a potato, including the flesh and peel of the potato."  (The plaintiff didn't mention that there's also a layer of melted cheddar cheese and bacon, but I digress.)

The plaintiff alleged that when she bought the bag of "Potato Skins Snacks" (from a gas station in New York for $1.99), she believed that she was buying chips that were actually made from potato skins.  This belief was based not only on the name of the product, but on the picture on the package (which she thought was a picture of potato skins) and on her knowledge of the actual TGI Fridays appetizer.  The plaintiff alleged, however, that instead of actual potato skins, the chips were made from potato flakes and potato starch (neither of which contains potato peels).

The court held that no reasonable consumer -- applying some common sense here -- would believe that these chips were identical to (or taste just like) the TGI Fridays appetizer.  The court wrote, "No reasonable consumer would believe that the snack chips, shelf-stable and sold at room temperature in gas stations, would be identical in taste or substance to an appetizer, prepared with perishable dairy products and served hot in a restaurant."  (Did I mention that they are served with ranch sour cream topped with green onions?  But, I digress again.)

The court also held -- in light of the photo of the product on the front of the package -- that no reasonable consumer would believe that the chips contain thick slices of potato skins.

The court did find, however, that a reasonable consumer could be misled into believing that the snack chips contain potato peels as one of its ingredients -- and that there was nothing on the package that suggested otherwise.  Therefore, the court allowed the plaintiff's false advertising claim to proceed on the basis of this allegation.

The court also dismissed the claims against Utz, the parent company, and TGI Friday's, the owner of the trademark, on the grounds that they had nothing to do with the packaging.

Is the lesson of this case, don't mess with people when you're talking about potato skins?  Possibly.  But, as readers of this blog well know, it's also yet another reminder that when you name a product, it's important to consider what the name may communicate to consumers about what the product actually is.

"A reasonable consumer does not lack common sense" 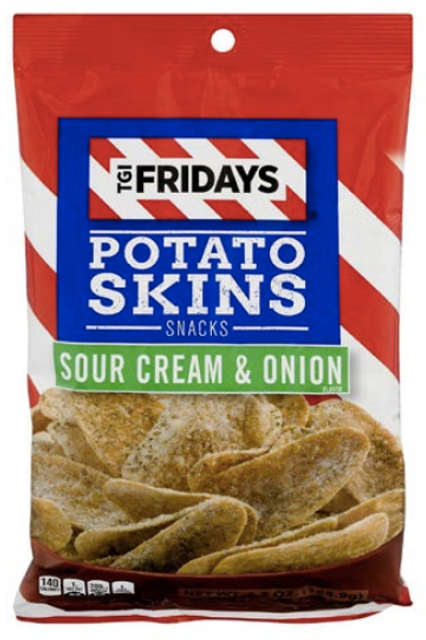